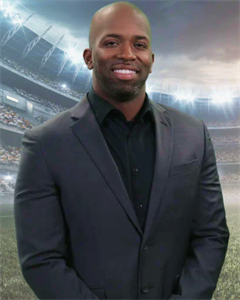 Michael’s path to success were fueled by the courage to say “No” as a teenager to a pair of coaching legends who wanted him to play for them. Pete Carroll’s and Nick Saban’s loss was Washington State’s win.

The careers of Michael Bumpus are a prime example of what’s possible when you combine versatility and earned opportunity. From Culver City to Pullman, to the NFL and a growing media career, it all really started by saying “No” to a pair of coaching legends, Pete Carroll, and Nick Saban.

Raised by a single mom who kept a tight leash on him, Michael had the role model he needed to pursue the goals they had set for him.

In high school he was an All American and the first player in his school’s history to have their Jersey retired and be named CIF player of the year. Up next, after saying no to LSU and USC among others, he attended Washington State University where he was a freshman All American along with All Pac-10 honors. During his career at WSU, he broke the schools all time receptions record and is still the most prolific punt returner in school history. But most importantly, it’s where he met his wife, future business partner and mother to his children.

Undrafted out of college, in 2008 he made it to the NFL as an undrafted free agent with the Seattle Seahawks. After a short stint in the NFL, I played in the CFL but after the season, decided to walk away from the game he loved to begin some new careers.

He began coaching high school football and training athletes in 2011. In 2014, he decided to bet on himself and opened “Elite Training Academy,” a facility geared towards preparing all levels of athletes.

In 2015, Michael began dipping his toes into the world of sportscasting which has taken him to his current roles which include serving as an analyst for the Pac-12 Network, talk show host at Seattle Sports/ESPN Radio and the host of Seahawks pre and post-game shows.

Michael, his wife, and their children reside in Monroe, Washington.

The Power of No

What type of inner strength did it take for teenager Michael Bumpus to say no to a pair of Hall of Fame caliber coaches to instead head to Pullman, Washington? And how did that decision provide a road map for some of the major career decisions he’s made since? Michael shares the lessons of his journey from record setting college player to the NFL, to coach, business owner and broadcaster with the best yet to come.

Former Washington State University receiver Michael Bumpus had a record setting career for the Cougars and made it all the way to the pros, but his time in the NFL wasn’t nearly what he had dreamed of. So, it was time for new dreams, new challenges and an inner drive that has made him a rising star in radio and television broadcasting. Michael shares the routes he’s taken and the adversity he’s faced turning disappointment into accomplishment.